India is the sixth largest coffee exporter in the world. But it hasn’t always been that way. From smuggling a few measly coffee beans into the country to transporting coffee on ships through monsoon season, India’s worked hard to earn its place at the table with the other coffee giants.

Learn about the intriguing history of coffee from India, how it grew in popularity, and what the market looks like today. We also cover Indian coffee plant varietals, how top-quality Indian coffee tastes in your cup, and how “monsooned” coffee first emerged.

On Deck (Table of Contents)

The History of Coffee in India

Legend has it that an Indian pilgrim named Baba Budan smuggled seven “magical” coffee beans out of Yemen into India in the 1600s (possibly around 1670). He then planted the seeds in the hills of Karnataka.

It wasn’t until the 1700s when British entrepreneurs started taking coffee production to the next level, converting forests into commercial plantations in South India. By the 19th century, coffee was an established commercial crop being exported to Europe.

The Evolution of the Indian Coffee Market

In Northern India, coffee cultivation bloomed long before the tea industry emerged. Up until 1991, however, coffee farms in India sold beans to the Coffee Board of India (which auctioned beans to other buyers) rather than to buyers outside of India.

Due to economic reforms, India’s market opened to the rest of the world so growers could start marketing and selling their coffee directly to buyers. The open coffee market allowed entrepreneurs to open cafes and share their love for coffee with other Indians. Brands like Café Coffee Day, Starbucks, Costa Coffee, and Sleepy Owl entered the scene (BBC).

Generally, Indians love their coffee sweet – with lots of milk and sugar. Specialty coffee made its debut in the 2010s but took a bit to gain traction across the country. Today, however, more coffee drinkers want to know the origins of their coffee and how it’s sourced and roasted – and are willing to pay for the highest quality cup they can find.

India is now the sixth largest coffee producer in the world. Beans grow under thick tree canopies in various regions of the Eastern and Western Ghats (mountain ranges along the coasts). It’s also essential to the economy and the region’s unique biodiversity (Coffee Board of India).

“It is often said, the Indian coffee grower pours his life into the crop.”

Arabica coffee in India is shade-grown at elevations ranging from 1,000-1,500 meters (about 3,300-5,000 feet). The 50 or so types of Indian shade trees help prevent soil erosion on the gentle to moderate slopes where coffee plants grow. They also help enrich the soil and offer protection from temperature fluctuations throughout the year.

The heavy shade, rain, fertile soil, and local spices and fruit crops (banana, pepper, vanilla, orange, and cardamom) are some of the many elements contributing to the region’s unique coffee profile.

India exports about 70% of the coffee it produces, 70% being Robusta and the other 30% Arabica. Arabica production is currently low due to recent flood damage and low international market prices. Today, Europe and the Middle East demand the most significant amounts of Indian coffee bean exports. Italian buyers, for example, love India’s Robusta parchment and cherry.

The Coffee Board of India controls the quality of exports and ensures that only the best-grade coffee leaves the country.

Some of the top coffee-growing regions in India are:

Here are some common coffee varietals you’ll find throughout India.

Coffee from India is both subtle and intense – earthy and spicy. According to the Coffee Board, India is the only country growing 100% of its coffee under shade trees, producing low-acid, mild, full-bodied, and exotic-tasting joe. You may notice hints of cardamom, pepper, clove, nutmeg, and maybe even tropical fruit when you sip specialty coffee from India.

What is Monsooned Malabar?

The monsoon season in India goes from June to August – and coffee producers in Mangalore take full advantage. Monsooned Malabar beans are processed differently than any other beans in the world. The concept emerged back when coffee was regularly shipped from India to Europe in wooden vessels. The voyage would take up to six months, and by the time the beans reached their destination, they’d be transformed – much larger, paler, and uniquely flavored.

By exposing top-grade coffee beans to monsoon rains and winds inside well-ventilated warehouses on India’s west coast, the beans swell to about twice their original size. The color fades to pale gold or ghostly white during the 12 to 16-week process.

The beans are then hand sorted to ensure consistency, re-graded, bagged, and moved to a drier region before being shipped to consumers. Monsooned Malabar AA is a specialty-grade coffee – the best monsoon coffee available.

How Monsooned Malabar Tastes in Your Cup

Like the production process, the taste of Monsooned Malabar is unique. You may pick up on its spicy, smoky, and earthy characteristics. Expect a creamy body with low acidity and hints of fruit and spice.

Up for trying something new? Our Indian Monsooned Malabar AA beans are big, beautiful, and delicious. If you like creamy, earthy coffees with hints of fruit and spice, this one’s for you! Our Monsooned Malabar also has very low acidity.

If that description doesn’t suit your fancy, we have over 20 other single-origin coffees for you to browse online. You can also visit our shop in Virginia Beach if you’re ever in the area. We’d love to talk coffee with you! 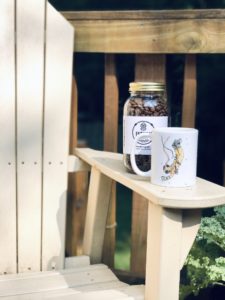